This iconic National Hotel located on South Beach launched a new menu  at the hotel’s restaurant, Tamara’s Bistro, that debuted October 1st.  The new menu created by  Executive Chef Pierre Sudre takes you from Miami to the Parisian countryside with classic French dishes like Croque Monsieur and Croque Madame along with Pissaladiere, Nice’s answer to pizza;  and sweet desserts for a happy ending.

Chef Sudre’s culinary adventure began in his native country of France where he earned a degree in Culinary Arts/Chef Training where he trained under the tutelage of some of the world’s most distinguished chefs, including Michelin Star Chef Patrick Pages at Hotel Le Chantoiseau. Chef Sudre then came to the United States through a culinary internship with Marriott, where he learned how to match his talent for gourmet dishes to large-scale hospitality operations.

After his internship he returned to his French roots while working for the Sofitel Hotels throughout the United States taking him from Texas, San Francisco, Miami and Europe where he learned new flavors and techniques that he carries with him to this day.After some time away, Chef Sudre made his return to Miami as the Executive Chef at the National Hotel Miami Beach.

Recently the hotel along with the hotel’s signature restaurant, Tamara’s Bistro, underwent a complete face lift and introduced the revamped menu giving locals and visitors a taste of Chef Sudre’s home. The  new menu includes Provençal Tart, a thin puff pastry tart with onions marmalade, white anchovies, Kalamata olives and Herbes de Provence;  Koulibiac de Saumon, a Salmon Wellington with spinach and rice, served with Crème Fraîche; and Risotto Paella made with Saffron Rice, Chicken, Shrimps and Petit-Pois.  Another addition to the menu (and my favorite) is a classic Risotto with Mushroom, cheese and truffle oil- cooked to perfection just the right amount of creaminess and the perfect hint of truffle oil that doesn’t over power the dish.

“The inspiration behind the new menu concept is to give guests a taste of authentic French cuisine, from their first bite to their last,” said Chef Sudre.

Chef Sudre’s passion for cuisine can be tasted in each bite.  Some of my favorites from the new menu include the Salmon Tartar, a perfect marriage of lemon, olive oil and avocado; the Nicoise salad; butter leaves lettuce, marinated white anchovies, green beans, cherry tomatoes, quail eggs, Kalamata  olives, and purple potatoes dressed with a Xeres vinaigrette; and the Truffled Mac and cheese (a new garniture added to the menu)– to die for! 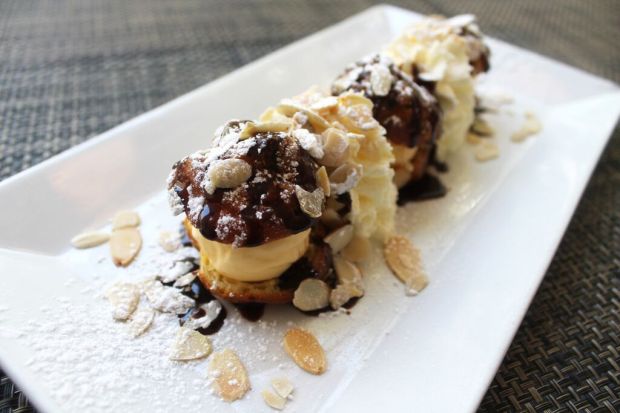 For the finale, because no meal would be complete without a sweet ending, Chef Sudre added new desserts such as the Tarte Aux Pommes Grand Mère with vanilla ice cream; Profiteroles filled with vanilla ice cream choux, sauce chocolat, Chantilly and toasted almonds; and a decadent Mousse Au Chocolat made with dark chocolate and Crème Anglaise on the side; talk about sinful.

From start to finish, your meal will have you saying, “Mmmmm, yes!”, and have you yearning for more.

This site uses Akismet to reduce spam. Learn how your comment data is processed.